Report of the Nomination Committee 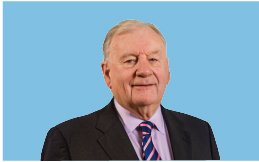 John B. McGuckian
Chair of the Nomination Committee

I am pleased to present the Report of the Nomination Committee (the Committee) for the year ended 31 December 2021.

This Report sets out how the Committee fulfilled its duties under its terms of reference and the UK Corporate Governance Code, the Irish Annex and relevant legislation.

At the heart of every organisation are its people, culture and values, which underpins the important role of the Nomination Committee. The Committee sets the framework for the development of an inclusive and high-performing leadership team and workforce. Reflecting on the Committee’s work at Board-level during 2021, a stated focus was Board refreshment, with two appointments made. This was a formal and rigorous process, which was designed to ensure the Board’s depth of experience continued to expand. As part of orderly succession and refreshment of the Board, two Directors also stepped down during 2021. At the time of writing, the Board is comprised of four non-executive directors and two executives.

With the Board changes which took place during the year there were consequent changes made to the Committee. I was appointed Chairman on the 12 May, following the resignation of former Chair, Catherine Duffy. Brian O’Kelly also stepped down as a member of the Committee and Board on 17 December. Both Catherine and Brian had served nine years as non-executive directors of the Company and I extend our gratitude to both for their service. The two new non-executive Directors Lesley Williams and Dan Clague joined the Committee during the year.

The Committee had a prominent role in the external board evaluation, ensuring that it delivered its aim of promoting greater effectiveness at Board and Committee level.

Column A: the number of scheduled meetings held during the year where the Director was a member of the Committee.

Column B: the number of scheduled meetings attended during the year where the Director was a member of the Committee.

In addition to the scheduled meeting, there was significant engagement between Committee members throughout the period to progress the Committee’s business.

The role, responsibilities and duties of the Committee are set out in written terms of reference and are reviewed annually. The Terms of Reference are available on the Group’s website www.icg.ie.

Its duties are to regularly evaluate the balance of skills, knowledge, experience and diversity of the Board and Committees and lead the process for appointments, ensure plans are in place for orderly succession to both the Board and senior management positions, overseeing the development of a diverse pipeline for succession.

The Committee considered the results of the external evaluation of the Board and the changes to Board composition made during 2021. The Committee was satisfied that the Board continues to be of adequate size and composition to suit the current scale of its operations and has an appropriate balance of skills, knowledge, experience and diversity to enable it to effectively discharge its duties.

As outlined in a number of areas of this report, the Committee is placing a particular focus on ensuring greater diversity at Board and senior management level. We are confident the changes we make to succession planning will address this imbalance versus best practice in the periods ahead. Outside of gender and ethnic diversity, as a Committee, we are confident the current Board’s skillset ensures the ability to oversee management and contribute to the development of strategy.

The Committee notes the Code’s comments on non-executive Director tenure and the tenure profile of the existing non-executive Directors. As reported last year, the Committee continued researching future potential candidates to ensure orderly Board refreshment during 2020 and 2021. That process culminated in the appointment of Lesley Williams and Dan Clague, who have both brought fresh insight and discussion to the Board. From the 2022 AGM, the average tenure of the non-executive directors, including the Chairman will be 11 years.

Outside of the newly appointed Directors. the Committee reviewed and recommended to the Board the re-appointment of the remaining Directors. In considering the proposals for the re-election, the Committee had particular regard for the tenure of John B. McGuckian. John has served as Chairman of the Board since 2004 and as a non-executive Director since 1988. This recommendation was proposed following a robust review of the knowledge, skills and experience that he contributes, in the interests of the Company and stakeholders. The Committee assessed him to be both independent in character and judgement and to be of continued significant benefit to the Board. Recognising the guidance of the UK Code, the Committee was also cognisant of the appointment of John well in advance of the revisions to market expectations on Chair tenure. The Committee expects to align with the provisions of the UK Code on this issue in the future; however, at this time, and particularly in light of the ongoing challenges in the Company’s industry, the Committee determined it appropriate for John to continue as Chair and leader of the Board. The Committee was also satisfied that the role of the senior independent director further ensures clear division between management and oversight.

The Committee did not identify any issues that were likely to impair, or could appear to impair the independence of the non-executive Directors, John Sheehan, Lesley Williams and Dan Clague.

No Committee member voted on a matter concerning their position as a Director.

The Committee reviewed the processes agreed in respect of workforce engagement described at pages 84 to 85 and was satisfied that these arrangements remain appropriate to the Group’s circumstances.

The Group values diversity and the benefits it can provide in promoting the success of the business. The Board’s Diversity Policy is set out on pages 89 to 90. In considering any appointment to the Board the Committee identifies the set of skills and experience required. Individuals are selected based on the required competencies of the role with due regard for the benefits of diversity. Currently, the female composition of the Board and senior management reports was 14% and 21%, respectively. In relation to future Board and senior manager appointments the Committee will actively seek out a greater pool of female candidates for consideration. External search agencies independent of the Group are engaged to assist where appropriate and their mandates include considerations of gender diversity and, in the periods ahead, ethnic diversity.

No recruitment for senior management positions requiring the input of the Committee took place during the period.